Basic Obedience commands are fundamental to forging a strong relationship based on mutual love and respect between owner and dog. These commands are also critical for the owner to assume the Alpha role in the family, or in the pack. A dog needs a defined alpha leader in its pack and if you are not that leader, the dog will accept that role. This can lead your dog to exhibit a wide range of inappropriate or negative behaviours such as repetitive barking, pacing, and refusing to sit or lie down.

Once you establish yourself as the Alpha leader, all such behaviours will stop. Your dog will be much less anxious and considerably more calm and happy overall, thereby acting in a well-behaved manner on a consistent basis.

The primary responsibilities of an owner when they begin training their dog are learning how to correctly work the leash and how to lead the dog rather than follow – how to become the Alpha leader. The owner must also establish a regular, daily routine and schedule upon which the dog can depend and rely. Daily exercise, mental stimulation and rest (in a crate; on a mat) are key elements to asserting yourself in the Alpha role.

The following commands are taught in all of our Basic Obedience programs:

Your dog will walk at your left side with his head even with your leg. He will walk on a loose leash, neither forging ahead nor lagging behind.

This is a part of the Heel command. When your dog is walking nicely at your left side, the automatic sit will be introduced. The dog will be taught to automatically sit when you stop walking and to hold the sit position until given another command.

Your dog will sit and hold this position until given another command.

Your dog will lie down at your left side and hold this position until given another command.

This is used to either reinforce another command or as an add-on to an existing command such as Sit or Down. The Stay command is given for those instances when the dog must hold a position for a minimum of three minutes.

Sit and Down (front commands)

Your dog will learn to respond to the Sit and Down commands when not positioned at your side. Initially, the commands are given from directly in front of the dog, and ultimately progress to points all around the dog.

Sit and Down (motion commands)

The Sit and Down commands can also be given when both you and your dog are in motion. Upon command, the dog will stop its forward motion and sit or lie down while you continue to move ahead.

Your dog will come to you and sit directly in front of you.

Your dog will go to a pre-determined area or location (perhaps a mat or blanket) and remain there until given another command.

With this command, your dog will drop an item (such as a ball, a stick or a non-owner-approved item) from its mouth.

The release command of OK is given in an enthusiastic voice and allows the dog to release or no longer hold a previously-given obedience command.

Obedience training without household manners can become just a series of parlor tricks. Manners include: sitting and waiting at doorways and exits, walking nicely and not pulling or biting on the leash, refusing food scraps or other temptations.

Your dog needs to be rewarded for positive response and performance. The rewards for good obedience work are verbal praise and petting.

This is used to help your dog create and maintain enthusiasm.

While Praise recognizes your dog for good performance, Correction lets your dog know that you do not approve of certain behaviour and immediately redirects its attention toward positive and desired behaviour.

Our Basic Obedience training programs teach the fundamentals of basic obedience structure and commands to dogs over the age of 4 months.

Alpha Paws offers such sessions one-on-one, either at our training centre or in the privacy of your own home, during which you and your dog will work in chorus with our instructor. After these private lessons, you will need to practice/work with your dog at home on a daily basis in order to support and continue the obedience training process.

Leading the Pack – An
Owner’s Guide to Dog
Training 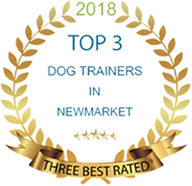 "We are so glad we came to you for training for Hogan. We would definitely recommend you to everyone! Many Thanks!..."